The old part of Ramerish Retreat is many hundreds of years old and was the stable block for what used to be Lochenbreck Spa Hotel. The hotel was a retreat for well off holidaymakers and also used by people recovering from TB. They were assumed recovered when they could walk to, and back from, the ‘hill of  health’ in the forest behind Ramerish. The spa was well known for its ‘healing waters’ from the well. There are no remains of the hotel, only Ramerish and the spa well remain.

The walls of Ramerish have only been repointed, the squareness and plumbness of the wall is great credit to the craftsmen who built it, and this was just the building for the horses! Among the well known guests who are documented to have stayed at the hotel are Robert Burns and Malcolm McLaughlin Harper. Burns is documented to have requested ink and paper on his arrival at the hotel one wet day to write ‘Scot’s Wae Hae’, which came to him on his journey to the hotel. Malcolm McLaughlin Harper had several stays at the hotel and wrote many articles about the hotel and the surrounding areas. 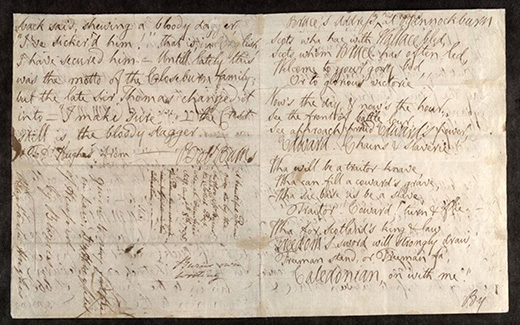